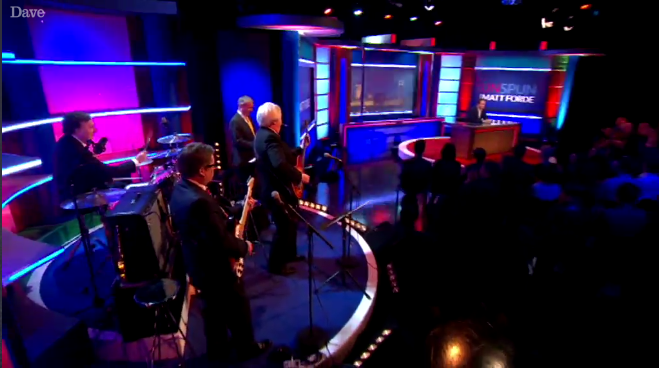 After a successful run last year, Unspun with Matt Forde returned for a second series of political satire on Dave. This series was filmed at The London Studios and Elstree Film Studios, with lighting designed by Martin Kempton, supported by Richard Martin Lighting.

The political landscape has changed a lot since the last series with Donald Trump now in the White House, Article 50 triggered for Brexit and talk of a proposed second Scottish independence referendum. Depending on your viewpoint, these may or may not seem like good things but under the astute gaze of host Matt Forde, they provided ample fodder for political satire and insight.

Filmed the day before transmission, the show featured Matt’s humorous take on the previous week’s events as well as reports from political correspondences, and interviews with political figures. This series’ guests included MPs Harriet Harman and Jess Phillips as well as former Prime Minister Tony Blair who stopped by to give his views on Donald Trump, social media and politics, as well as Christmas with the Blair’s. Completing the set up was the house band, MP4, made up of current and former Members of Parliament.

“As ever, RML supplied all the extra kit I needed for this series – in fact double the rig as we had to do one show at Elstree Studios.  It was all of course in tip top condition and very well supported by their top team of technicians.”

Matt Forde’s irreverent take on politics is fresh and funny, and something definitely needed in this current climate.

Unspun with Matt Forde is available to catch up online at UKTV.